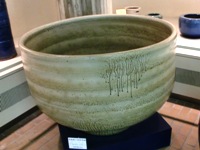 Shigaraki ware is a pottery produced mainly in Shigaraki area in Koka city, Shiga prefecture.
Shigaraki ware is characterized by its distinctive form brought by the wood firing; the reddish-orange (scarlet) color from oxidation of iron in the clay, natural ash glaze acquired from the deposit of ashes in the kilns, and “Koge (Burn)”, the result of being buried under embers during firing. Rustic surface caused by inclusion of fine stone particle such as a piece of quartz, feldspar or silica is also characteristic of Shigaraki ware.

It is often said that Shigaraki pottery and Iga pottery have similarities in style. This is because both Shigaraki and Iga are produced in neighboring district and use the same clay from Lake Biwa. It is the clay that brings forth the warmth and simplicity of “Ko-Shigaraki(Old Shigaraki)”.

The clay of Shigaraki, endowed with fire-resistance and elastic properties, is well suited for making large-sized items. In the realm of small-item production as well, the clay has a certain obliging stickiness. As a result, a wide range of Shigaraki ware has been developed.